Thanks, for coming everybody to our show at the Asbury Hotel, and for being so generous to the amazing Jeremy Chatzky and Joe McGinty when we passed the bucket. Stayed turned here for more news, including future shows and other developments involving this crazy Deborah Dutcher project, on right here. Rave on! 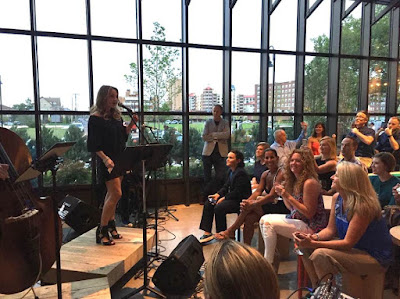 Tonight's show in the lead story in the Asbury Park Sun. 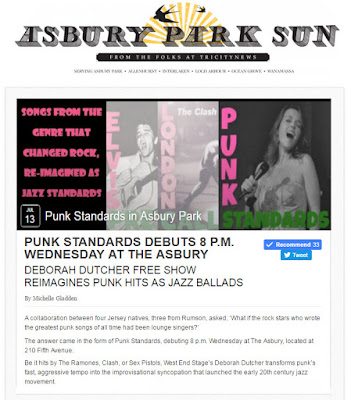 And the song of the day is Personality Crisis. It was a barn burner when the New York Dolls released it in 1973, and it made a concert venue collapse on a dance hall full of people in the first episode of HBO's wonderful new series Vinyl. Hopefully the Asbury Hotel will remain intact after this evening's performance. See you there.
Posted by phil kuntz at 10:38 AM 1 comment:

When Talking Heads recorded Life During Wartime, it was apocalyptic and manic. When Deborah Dutcher sings her unique version during her Punk Standards show Wednesday night in Asbury Park, it'll be desperately sensual, evoking the feel of British jazz club during World War II. 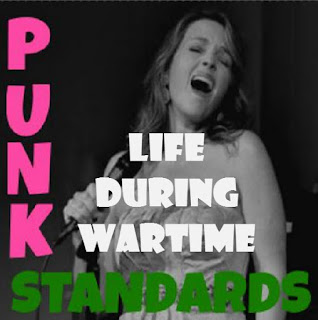 Enjoy -- and please share, invite your friends, shout from the rooftops.
Posted by phil kuntz at 5:47 PM No comments:

Deborah Dutcher's Punk Standards show is less than a week away. Check the poster the kind folks at the Asbury Hotel did up for us. Click Ca Plane Pour Moi for our sample song of the day. 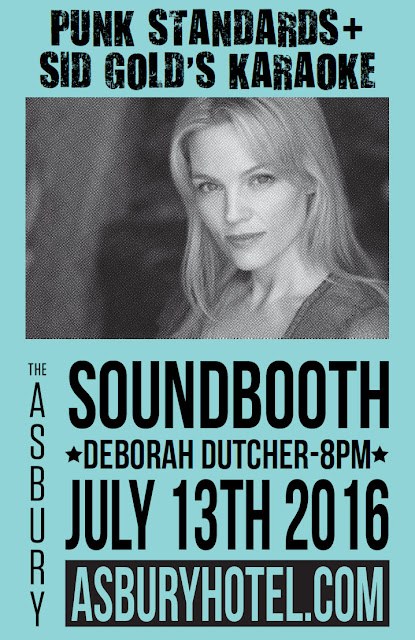 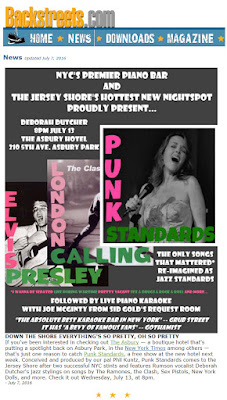 We got a shout-out from the kind folks at backstreets.com, the Bruce Springsteen fan website:

DOWN THE SHORE EVERYTHING'S SO PRETTY, OH SO PRETTY
If you've been interested in checking out The Asbury — a boutique hotel that's putting a spotlight back on Asbury Park, in the New York Times among others — that's just one reason to catch Punk Standards, a free show at the new hotel next week. Conceived and produced by our pal Phil Kuntz, Punk Standards comes to the Jersey Shore after two successful NYC stints and features Rumson vocalist Deborah Dutcher's jazz stylings on songs by The Ramones, the Clash, Sex Pistols, New York Dolls, and more. The Sessions Band's Jeremy Chatzky holds it down on bass. Check it out Wednesday, July 13, at 8pm.

Today's sample comes as a request from Deborah Dutcher herself, so it's obviously one of her favorites. 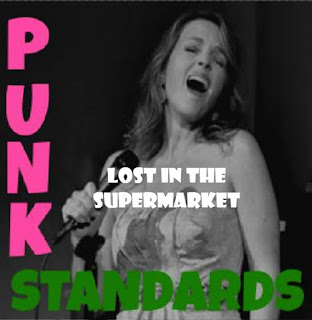 It's from The Clash's classic London Calling album, from which we stole our album design, but they stole it first, from Elvis Presley. Enjoy Lost in the Supermarket.

This sentence is a shameless plug for a great website of fun things to do in NJ. The folks there have just launched a cool new kids party directory, for all the young punks out there.
Posted by phil kuntz at 4:37 AM 1 comment:

You've Never Heard 'I Wanna Be Sedated' Like This

An actress with credits worldwide, Ms. Dutcher starred as Christine in "Phantom of the Opera" on London's West End and in its 25th Anniversary celebration at the Royal Albert Hall. She was the original Cosette in "Les Misérables" in Germany, in Belgium and on the Flemish and German cast albums and also played the role in Scandinavia. She toured Europe as Priscilla Presley in "Elvis, The Musical." Ms. Dutcher is a Corning, New York native and a resident of Rumson, New Jersey, where she moved after postponing her career to raise her son, Donovan.

This sentence is a shameless plug for a great website of fun things to do in NJ. The folks there have just launched a cool new kids party directory, for all the young punks out there.

Mr. McGinty will provide musical accompaniment. Mr. McGinty is the Psychedelic Furs' former keyboardist, has worked with the Ramones, Ronnie Spector and Ryan Adams and founded the popular "Loser's Lounge" series of homages to pop icons. He was born in Atlantic City, New Jersey.

Mike Woolmans, an award-winning composer, arranged the music for Punk Standards. A former BBC sound engineer, Mr. Woolmans spent the 1980s playing "Mikey," the popular sidekick on UK's radio program "Steve Wright in the Afternoon." His jingles for BBC's Radio One won awards, and he co-wrote "I'll Be Back" by Arnee and the Terminaters and performed it on TV's "Top of the Pops" after the single reached No. 5 on the charts. He composes music for movies, radio, TV and theater. Mr. Woolmans was born in London and lives there.

Punk Standards was conceived and produced by Phil Kuntz, a Pulitzer Prize-winning journalist for Bloomberg News who has also worked for The Wall Street Journal. He is co-author of "The Sinatra Files" and was a researcher and commentator on Oscar-winner Alex Gibney's Emmy-nominated HBO documentary "Sinatra: All Or Nothing At All." Mr. Kuntz is a New Jersey native and lives in Rumson.

Donovan Mannato, Ms. Dutcher's husband, co-produced Punk Standards. A financial advisor, Mr. Mannato also is a Broadway producer and filmmaker. Credits include "Ghost: The Musical" on West End and Broadway, "Truman Capote's Breakfast at Tiffany's" on Broadway and "Prey for Rock & Roll," a movie starring Gina Gershon. He played a juror in Jonathan Demme's "Philadelphia." His next project is a musical adaptation of "Back to the Future."